For most of American history, no one under the age of 21 was able to vote. However, as a result of military conflict in the 21st century and a Supreme Court decision, this amendment was necessary.

During World War II, the draft pulled millions of young men aged 18 to 21 into the U.S. military. 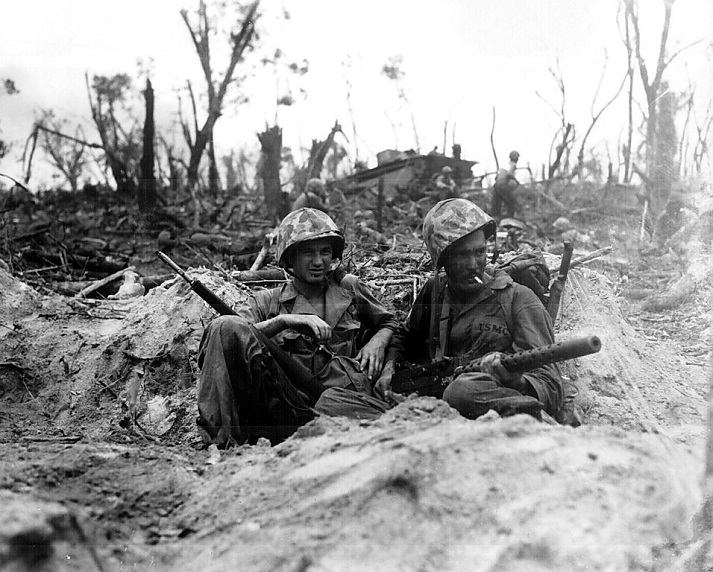 Image by U.S. Marine Corps, via Wikimedia Commons, is in the public domain.

Imagine you were one of these two young men sent into the Pacific Ocean to fight a war.

In the United States, the federal government can authorize a military draft that randomly selects men aged 18 to 25 and requires that they serve in the military.

During the World War II draft, these men were sent thousands of miles away by people they did not have the right to vote for.

Even though hundreds of thousands of these young Americans gave their lives this way, discontent over this injustice quickly subsided because the war was considered of grave importance and ended with an unequivocal victory for the allies. 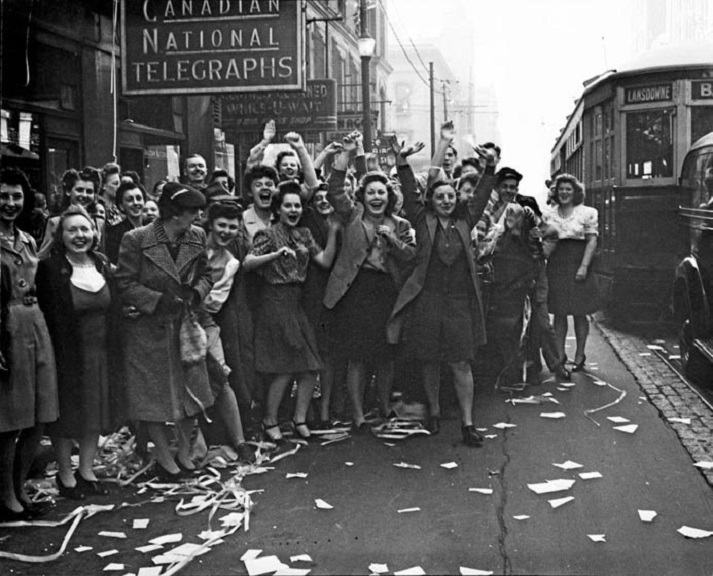 The discontent returned, however, during the Vietnam War. 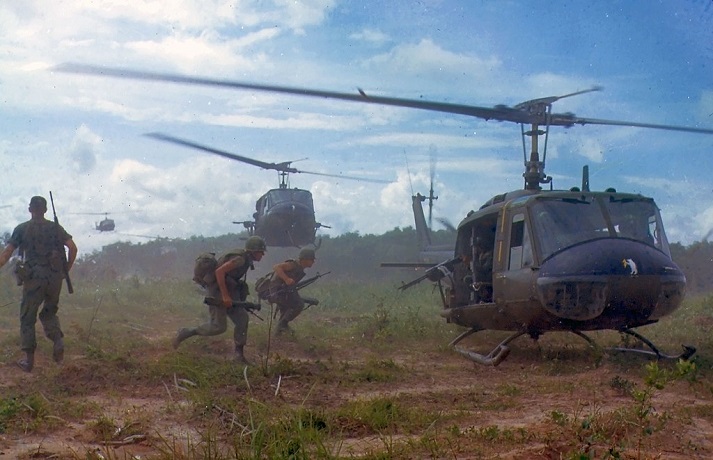 Image by James K.F. Dung, SFC, via Wikimedia Commons, is in the public domain.

During the Vietnam War, the U.S. once again drafted young men into the military, causing college-age students to take up the protest slogan first used during WWII: 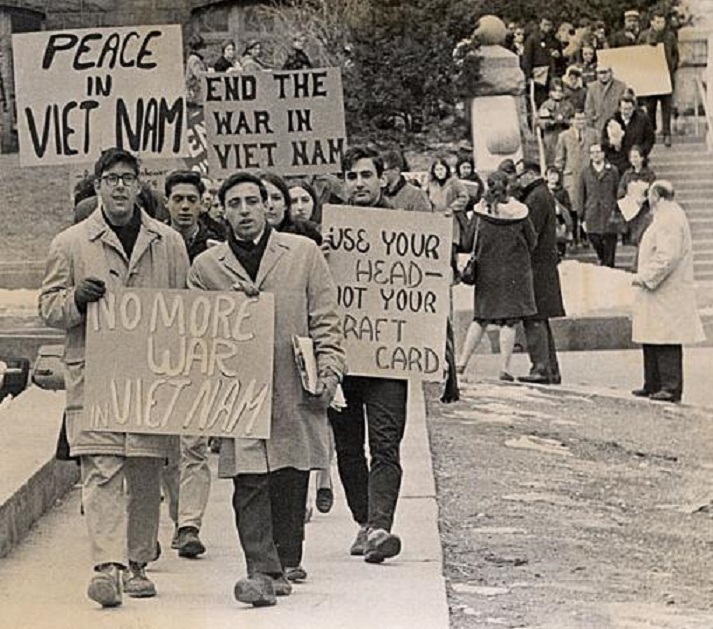 Image from University of Wisconsin, via Wikimedia Commons, is licensed under the CC BY 2.0 license.

Just like during WWII, young people did not believe politicans should be allowed to send them to war if they were not allowed to be included in the political process by voting.

Unlike World War II, this war was seen as useless and unwinnable by many people. It did not evoke the same sort of patriotism as previous wars had.

During the 1960s, the Civil Rights Movement was also a powerful force in the country. 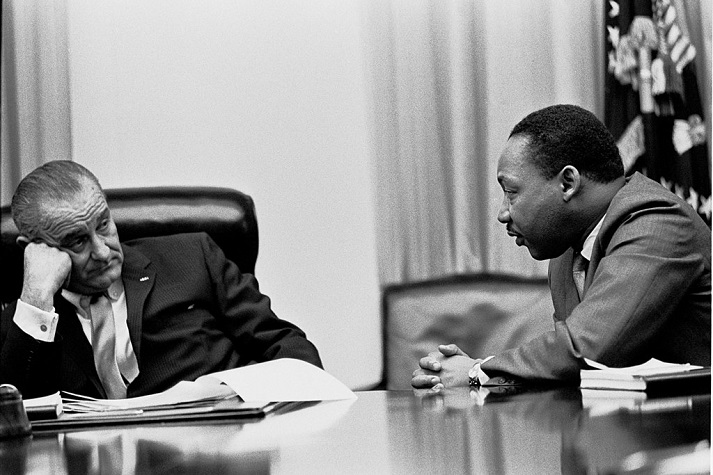 Image by Yoichi Okamoto, via Wikimedia Commons, is in the public domain.

In 1965, the Voting Rights Act was created to protect African Americans' right to vote. It also included an additional clause that lowered the voting age for federal elections to 18.

Citizens between the ages of 18 and 21 were able to vote for the president and Congress members but could not vote in local or state elections.

That was until 1970, when Richard Nixon tried to make the states lower their voting ages without using a constitutional amendment to do so.

Watch What is federalism?, from USLawEssentials, to see how both levels of government have their own authority and power:

Federalism means that the federal government can only force the states to do something if the U.S. Constitution is changed because 3/4 of all states must approve an amendment to ratify it.

Despite this, Nixon extended the Voting Rights Act to state that all states must lower their voting age to 18 for all elections, not just national ones. 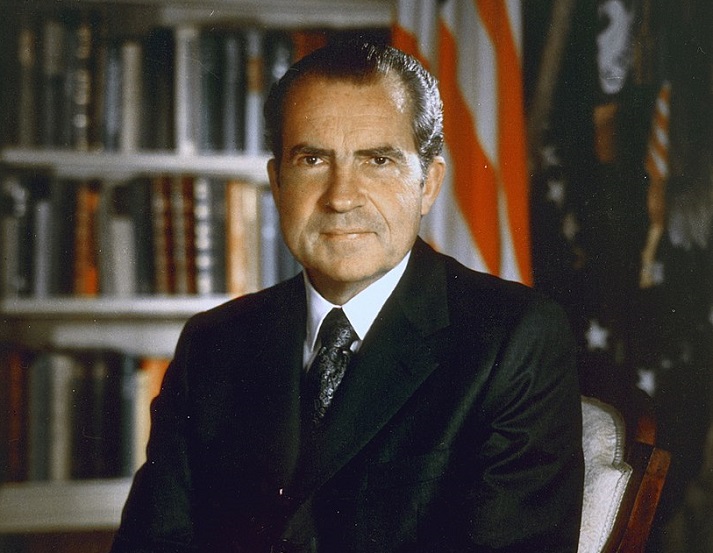 Image [cropped] by Oliver F.Atkins, via Wikimedia Commons, is in the public domain.

The state of Oregon almost immediately challenged this extension in the Supreme Court case Oregon v. Mitchell in 1970.

The Supreme Court ruled that, while the president was well within his right to lower the federal voting age, he could do nothing about the voting age in state elections.

The president and Congress rapidly went to work to amend the Constitution in order to make 18 the voting age for every election across the country.

Oregon v. Mitchell was decided in December of 1970. By March 1971, the proposed 26th Amendment had already been approved by both the House and the Senate. 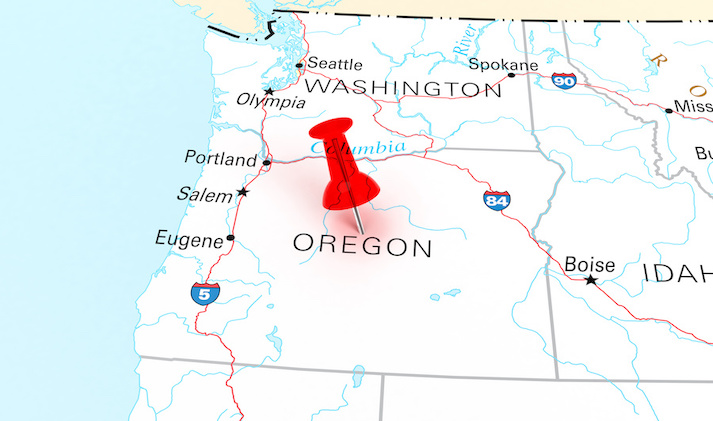 From this point, it went to the states. It only took another four months for 3/4 of the states to ratify it, and the amendment became the law of the land.

The 26th Amendment holds the record for being ratified the fastest from proposal to law.

Move on to the Got It? section to explore why this amendment was so rapidly approved, why it was challenged, and why politicians thought it was a good idea.