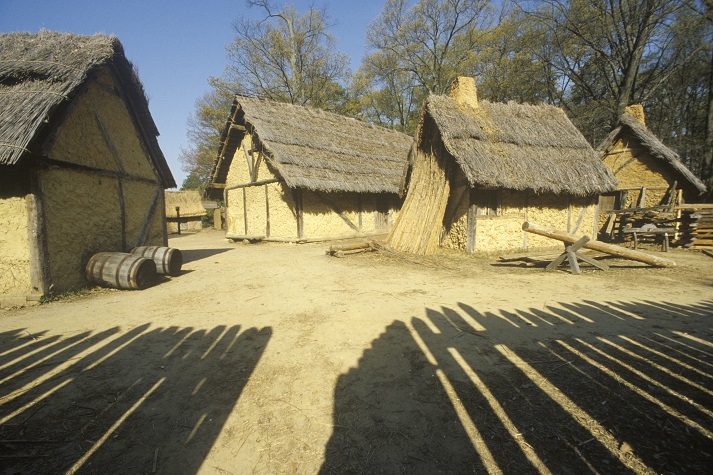 What's the Mason-Dixon line? Why are there two Carolinas? Why is there Georgia? Join Mr. Zoller, fill out a crossword puzzle and continue your slide or book project as you study the Southern colonies!

Today, you will complete the third Related Lesson in the Colonial Regions: How the 13 Colonies Got Their Start series. In the previous Related Lessons, found in the right-hand sidebar, you learned about the New England and Mid-Atlantic colonies. Each colonial region was unique in its primary purpose for establishment, geography, and role in colonial America. You will learn about the five remaining colonies that made up the Southern colonial region.

Get out all the materials you have been building with for each lesson.

Make sure you have the chart with information about each colony, and the visual presentation that you have been creating. You will finish creating each of these pieces today.

Before you begin exploring the Southern colonies, take some time to review your chart and project as a quickre-fresher about the New England and Mid-Atlantic colonies. As you study the final colonial region, be sure to continue comparing and contrasting each of the regions.

Continue the chart that you used to record information about the New England and Mid-Atlantic colonies. The Southern colonies consisted of five colonies, so you will need to add an additional row for today's lesson.

Fill in each of the sections on the chart as you watch Mr. Zoller's Thirteen Colonies: the Southern Colonies:

Look at the information you recorded today, and compare it to the information you recorded about the New England and Mid-Atlantic colonies. How are the regions alike? How are they different? Since you have now had the opportunity to learn about all 13 colonies, think about which colony interests you the most. What colony would you have wanted to live in? Share your responses with a friend or family member.