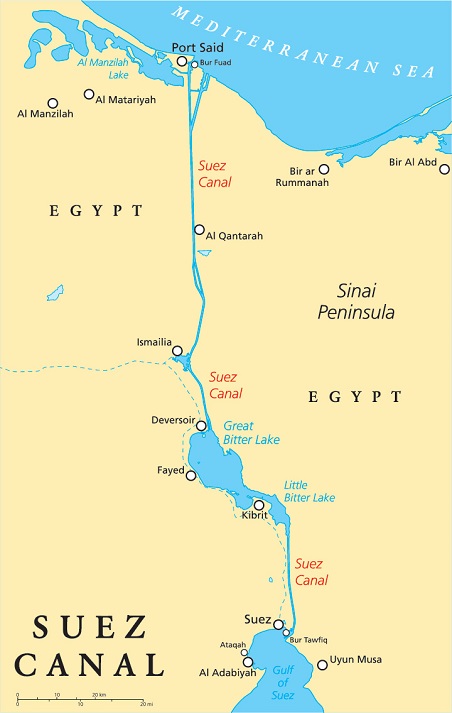 Have you ever dug a hole in the garden or somewhere else by hand? Have you watched a building be constructed? Imagine digging a 101-mile-long hole without modern equipment! Journey on the Suez Canal!

What kind of tools would you want to dig out a canal? Does it sound like a fun job? See what digging the Suez Canal was like and then decide!

A canal is a waterway that connects two large bodies of water.

In times past, canals were really important because they were the fastest ways to move things and people over large distances. Think about it — if there were no highways, no trains, and no airplanes, water would be the way to go!

Even today, canals remain important. One of the most important canals in the world is the Suez Canal in modern-day Egypt. Take a second look at the map in the beginning of the lesson and trace the Suez Canal from top to bottom. About 40 ships pass through that canal daily. That’s about 14,000 ships a year! Most of those ships are carrying cargo — products of every kind from all over the world.

Watch the video and make your best guess:

In reality, it takes about ten to sixteen hours for a ship to pass through the entire Suez Canal. Read more about the canal and its history.* As you read, write down notes to answer the following questions:

*Now, read the article, Suez Canal, courtesy of KidzSearch.com, and collect your answers. Share your responses with your parent or teacher, then discuss these questions:

You might be shocked to know that the Suez Canal is not exactly new. In ancient times, the Ptolemy rulers of Egypt actually built the first canal to connect the Red Sea with the Mediterranean Sea. Can you imagine how they could have done such a thing without any modern machinery at all?

In the Got It? section, examine the tools and methods used to build the modern Suez Canal.